A tribute to Stéfan 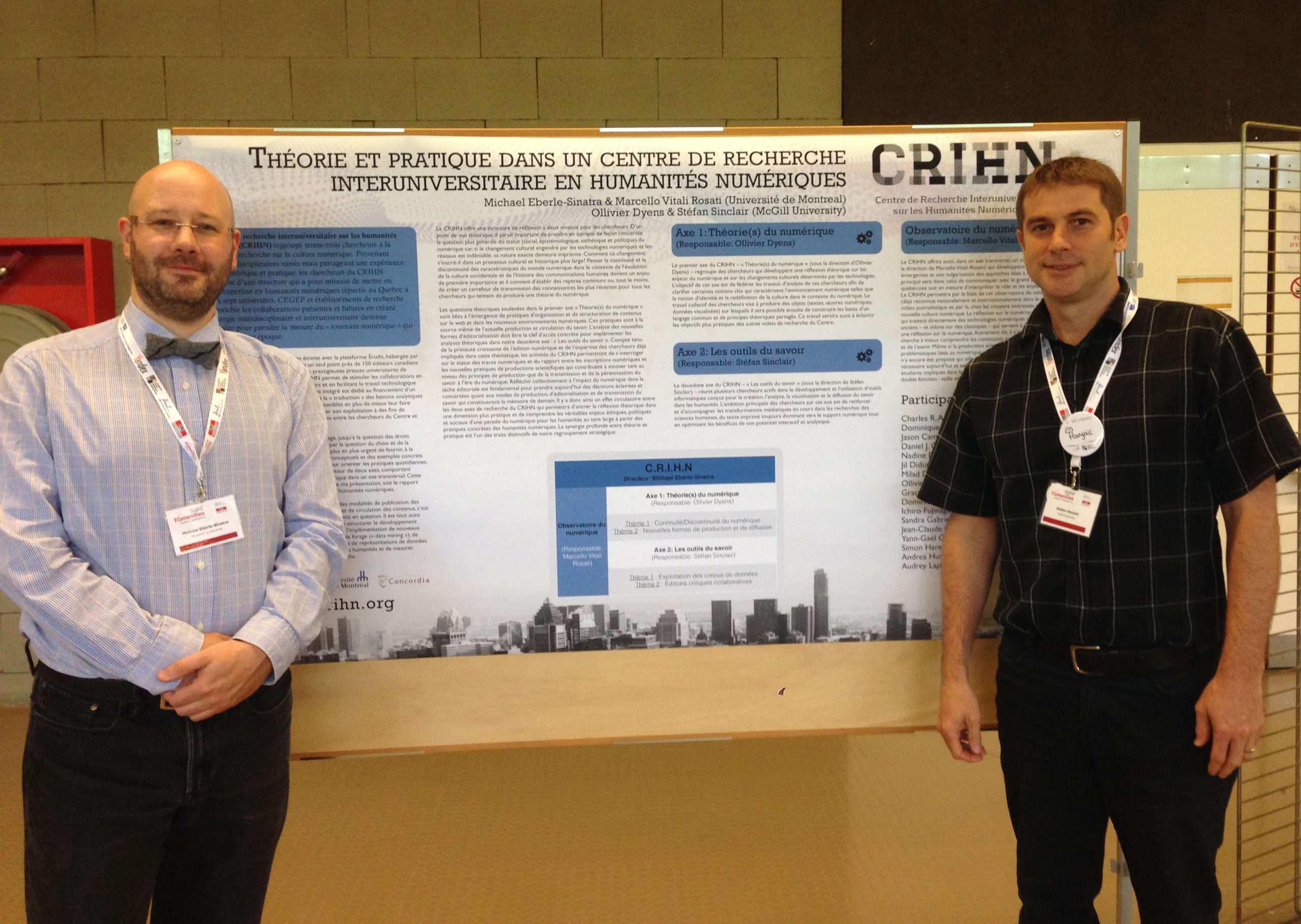 [Stéfan and I in front of the first poster describing the recently created CRIHN at the DH2014 conference in Lausanne.]

I had the privilege of saying a few words during the commemoration of Stéfan Sinclair’s life yesterday. I am pasting them below as a tribute to my friend:

I first got to know Stéfan professionally about twenty years ago when I came to Canada and started getting involved in the Digital Humanities community with Susan Brown, Ray Siemens, and Geoffrey Rockwell (who’s here with us today). Like many around the world, I got to see Stéfan’s unique combination of remarkable programming skills and humanities sensibility that allowed him to make one of the most important contributions to the field with Voyant. Like many teachers around the world, I spent a good chunk of my summer graduate seminar two months ago teaching my students about this tool and its ability to bring together computational methods with texts in a way that does what the best tools do: they answer some questions and make you ask some more, which Stéfan loved hearing about in our daily text messages.

When Stéfan and Stéphanie moved to Montréal in 2011, Stéfan and I were already working more closely together in the running of the Canadian Association for Digital Humanities when I was the French President and he was vice-president. Because he was always helpful and generous with his time, he stayed on after his term ended as our webmaster to take care of our site and server as we prepared to launch our journal. Anyone who knows Stéfan could recount his generosity, kindness, and enthusiasm to support others, especially students, and his genuine pleasure to work with others.

When I decided to launch the first interuniversity center dedicated to digital humanities in Quebec, I asked for Stéfan’s advice and vision and, as always, he was more than happy to engage in many long conversations and planning sessions (many of which took place at his home since, as everyone who got to see his coffee maker in action with Stéfan at the helm, there was simply no better place to meet). We launched the center in the fall of 2013, and he continued being involved in running it until this spring when he and I were discussing the next steps for this adventure of ours. I am happy to say that his crucial contribution will be remembered with a new annual lecture named in his honour, beginning next year.

Stéfan always found time to encourage graduate students but also junior colleagues, never being one for thinking that his being a senior colleague meant that he shouldn’t promote others, on the contrary. When he and I successfully got the bid to host the world conference on digital humanities in 2015 to be hosted on McGill Campus in the summer of 2017, he mentioned a new colleague hired that very year at McGill, Cecily Raynor, and how we should find a way to get her involved. And in January 2017, Cecily formally got to join Stéfan, Dominic Forest, and I as local organizers and her contribution was crucial to the smooth running of an event with close to 1000 people over five days. But Stéfan did not only stop there of course, and he continued to encourage her and others to grow into major contributors to the field in various ways.

To say that Stéfan changed some people’s lives is in fact not far fetched in the case of our mutual friend Marcello Vitali-Rosati who repeatedly thanked Stéfan for encouraging him to apply to the job he got at the Université de Montréal, and for being such a positive, inspiring scholar who showed others that coding was not such a bad word in the mouth of literary scholar after all. When Marcello was hired in the spring of 2012, I invited him over for dinner and of course Stéfan was there too. We laughed, talked shop, and talked about our family, as we would many, many times in the years that followed, whether it was while enjoying Stéfan’s homemade sushi, or his genuine appreciation of an amazing bootle of Brunello with the biggest piece of tuna he had ever seen at our friend Dominique Bérubé.

As life would have it, when Stéfan and Stéphanie arrived in Montreal was also the year that my divorce proceedings began and my having my two children on my own every other week. Stéfan’s love for his children was something else we had in common, and we spent many, many hours in the years that ensued with our kids at the pool, at the cinema, tobogganing on Mont Royal, or at their chalet together (as long as I didn’t forget to bring doughnuts from Dora on the way of course).

Over the last two years as Stéfan spent more time at home, I started visiting him weekly for coffee if he was up for it to continue talking shop or about science-fiction, Apple products, comics, or cinema in person, and of course more exchanges about our kids and our hope for their future. The last time I saw Stéfan in person was two weeks before he moved to the palliative center, and he was his usual self, curious about the next planned activities of our team, work on the latest grant he and I were awarded in the spring from SSHRC, and also any new tv series I would recommend him. This last time I got to have a beer instead of coffee since I came in the afternoon and he laughed that I was taking too long to drink it as he had a call planned with Terry. Stéphanie encouraged him to go ahead and let me finish my drink with her as we all laughed that he didn’t want to miss being part of our discussion. I miss him terribly, and will miss him dearly for years to come.