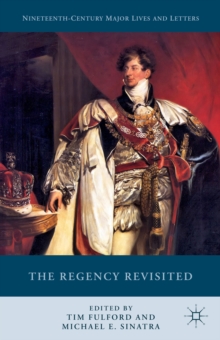 ‘Senators and Actors’ : Leigh Hunt’s Theatrical Criticism and the Regency Introduction to The Regency Revisited

The Regency Revisited demonstrates how politics and culture of the Regency years impacted literature. By co-opting authors, the Regency provoked opposition and brought new genres and modes of writing to the fore. Discussing key figures such as Robert Southey and Leigh Hunt, The Regency Revisited examines the pivotal roles that authors of the Regency had in transforming Romanticism. Austen and Byron, for example, honed their satire in response to Regency culture. Other topics in this collection include Blake and popular art, Regency science (Humphry Davy), Moore and parlour songs, Cockney writing and Pierce Egan, and Anna Barbauld and the collecting and exhibiting that was so popular an aspect of Regency London.